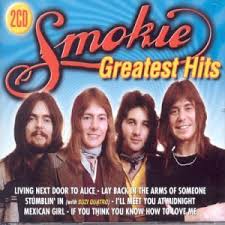 Trevor Webb… Trevor wants to know if Smokie every played Hastings and if any one has any photos or merchandise.

Matt Thomas… My sister saw them play in Eastbourne late 70’s,dont know if they played Hastings!!!

Sarah Harvey… I have no record of them playing in Hastings

Peter Fairless… Not to my knowledge. They were a long formed band before RAK. That’s why they were so good

Robert Searle… I saw Smokie at The Congress Eastbourne when they were at the top of their game in the 70s.Really good group.

Geoff Peckham… Can’t answer the Hastings question, but there’s a Factory connection with Smokie. Perhaps Andy Qunta can help me finish this. While we were gigging around the North West, we had a gig in Preston cancelled, so we decided to spend the day and evening in Blackpool. We visited the Dr Who Exhibition, then went to the Mecca or whatever it was and downstairs in the bar was this band playing, who we learned later were to change their name to Smokie. They were brilliant and in their set they played the long medley from Abbey Road note perfect.  Now Andy, can you relate the German TV postscript to this?

Andy Qunta… Yes indeed, Jaffa! That was in about 1974. Around 1981 I was at Heathrow airport on the way to do a TV show in Germany with Hazel O’Connor. Smokie were there too, on their way to the same TV show. I went over to them and told them I saw them a few years back and thought they were great. Without any hesitation, the bass player, (whose name I can’t remember at the moment), said “yes, it was in Blackpool, 1974. You were 7 rows back on the right.” I couldn’t believe it. The rest of the band told me he did that all the time! Wow!

Jim Breeds… I have a cassette tape of them live on Radio 1 from the 1970s. At the time I thought they were underrated even though they were (if memory serves me right!) a Chinn & Chapman invention. The live gig seemed to bear that out. I haven’t played it in years! Correction. Just looked at the cassette. I wrote on it “Smokie Live, Capital Radio, March 1977.”

Terry Huggins… They are still gigging, although there’s been some line-up changes. They played under various names befor becoming Smokey, but were threatened with legal action by a certain Mr. Robinson, so they changed it to Smokie.

John Williams… I think they were living next door to alice. I play there music all the time mexican girl my best

Ray Murrell… who the fek is alice.

Peter Thomson… We went to a Denis Lacorriere (Dr Hook) gig in Peterborough a few years back. Support act was Chris Norman. Superb night out. Alice?

Tuery Records… I think they were booked to play the pier , but at the last minute the label RAK made a change and that’s when the Arrows played. Be about 1974. Mick O’Dowd would know.

and then I found this…

They were booked but cancelled and replaced with The Arrows. Maybe then were not happy about the spelling! Trevor Webb asked if Chris Norman was booked for The White Rock Theatre would you go to see him and his band?

Janet Rennie… yep I so would , loved the Arrows and Smokie

Pete Dearling…   I got my album signed by them I can’t remember if it was from Hastings pier or if they played at Eastbourne, the album was bright lights around 1977 / 1978

John Williams… Just got Chris Norman’s album half is smokey and the other just Chris great CD from Germany.

Michael Johansson… and huge in Sweden as well!