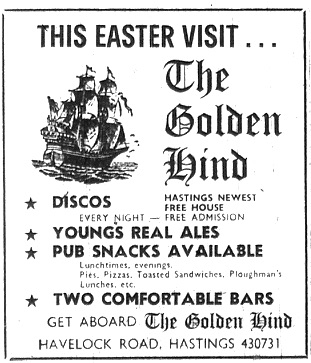 Tony Davis says… Was looking through SMART the other day and saw some photos of Steve D and it took my mind back to the days when I worked at the Golden Hind. Started me thinking if anyone has any photos of those days circa 1979-1983. If you’ve got any photos, stories or thoughts lets see if we can get a thread up and running on SMART.

Graham Belchamber… Remember the pub and I’ll have a think through the old grey matter!

Mike Mitchell… I met my wife in The Golden Hind. Sticky carpet and video juke box. That’s the pub not the wife.

Leigh Wieland-Boys… Went to the Golden Hind most weekends before going nightclubbing! Worked in Havelock Road & often popped in at lunchtimes too. Loved that place – lots of good memories!

Stephen Kolimbarides… Remember it well. Had a couple of really good years running the bar for Steve. Great crowd of regulars made it one of the best pubs in town. Lived next door to Saturdays till I moved into the Hind. Yes it was a long long time ago.

Leigh Weiland-Boys… Remember you from my time with Steve D back in the mid 70s & behind the bar at the GH. A couple of lifetimes ago!

Julie Findlay-jones… Was that the pub with the guy who picked up the empty glasses but would sit and pretend to play cards n spoke to himself .

Stephen Kolimbarides… Mustapha. He collected half full glasses as well as empties and necked them on the way to the bar.

Eddy Slaug… I help clean the cellar and the back of the golden hind when  Derrick Stapley and Dee stapley took it over around 35 years ago.

Denise Killick… Went to the Golden Hind back in the summer of 1980 with my friends Chantal Lacelle and Alexis Christmas. Chantal and I were visiting from Canada seeing my Gran in Bexhill but the only pub there was closed. So we hopped the train to Hastings. After getting turned away from a Club because they told me I was looked too young, even though I had my passport and drivers licence and I was 23. Then they told me they wouldn’t let us in because I was wearing joggers. For crying out loud! This guy at the back of the club heard what was going on and quickly came after us in his car – he was a cabbie and he told us about where we should go. We weren’t sure of his intentions but he calmed our nerves and took us to the Hind. Shelf beer and all. It was really crowded and loud. But I’ll never forget it. We had to drink our beers in a real rush in order to catch the last train back to Bexhill. What a drag because I really starting to enjoy the place. Peter Fairless… Yes, I didn’t use it a lot but I do remember it.

Chris Meachen… I remember when Steve had just bought the place, he dragged me off the street,- “come & look at my pub”.. Had some good & interesting times in therr!