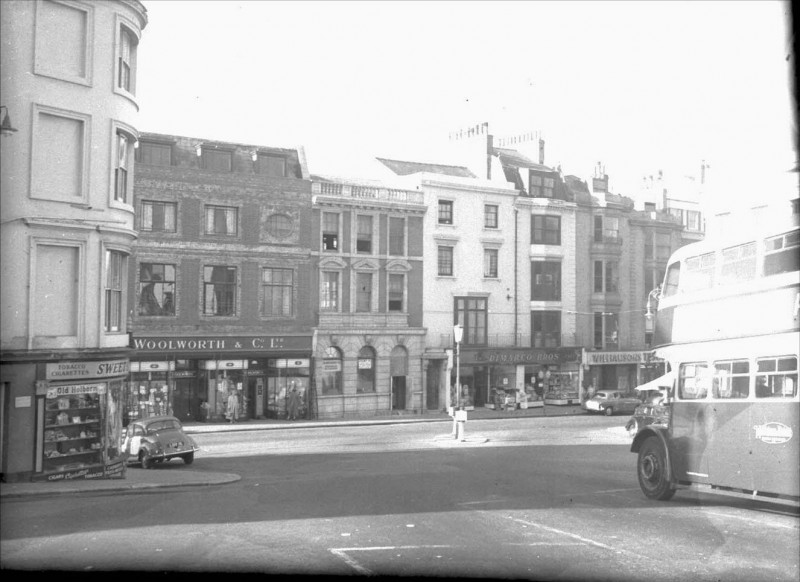 Hastings Museum & Art Gallery… We have a double throwback today – who misses Woolies and is that an old route master bus as well? We think this photo dates to the 1950s.

Peter Fairless… Before Woolworth’s had a remake. Anyone know when that was?

Lloyd Johnson… What no Dengates?…linen jackets,Benny Hill caps, leather money pouches and separate tickets on a wooden sprung block of wood….I Loved the cream and green Dengate buses a total throwback to the 1920s /30s….and still running in the early 60s..

Sid Saunders… Not a Routemaster bus, they only operated in London.

Jacqueline Marsh… My mum worked at that woolies

Sarah Harvey… I know, My mum and I bought a Helen Shapiro single there and Aunt Phil served us

Lynda Whatley… and Aunt Nell was a supervisor there-

John Gale…Never seen that photo before,,, loved Dimarco’s. A great place to go on a Sunday afternoon between Sunday lunch time closing and evening opening times for the pubs, saved going home,. Made alot of friends in there, can’t imagine that happening in McDonald’s so much

Mick O’Dowd… Is that a bank next door. If so which one?

Jim Breeds… The Ministry of Food, I think.

Mick O’Dowd… Where was the silly walks one located Jim?

Gary Benton… When I was in the fire service the basement of woolworths was always know as a firefighters worst nightmare, its like a rabbit warren. We would often say to each other “see you under Woolworths”

Jon McCallion… I have run round the corner many times when I did a paper round from the shop just up from there in Castle Street, Wish it was like it now compared to this we have a complete mess in our town centre

Tony Davis… I’m currently trying to get photos of Hastings in the 60s and 70s for a book I’m having a go at writing. Particularly interested in the Town centre and George Street. Can anybody help please

Andy Davies… Does anyone know who ran the sweet shop? My Granddad used to have a shop around there but as I never saw it, I don’t know. His surname was Horsfall.

Andre Martin… Routemaster buses were London Transport, what you have in shot is a Maidstone & District, possibly a Layland rear loader, with the driver stuck in a small cabin under the top deck and over the front RH wheel, I was told these were cramped and had no heating – just right for the country routes. Good image of the Town Centre, before the planners decided to make unnecessary changes.

Richard J Porter… No heating but a 7 litre + diesel to keep you company under your left elbow.

Bernard Goffredo… There was a Hotel behind the bus, I remember going there with my dad to pick up his drumkit after he had done a gig the night before

Nigel Ford… I used to catch a SOUTHDOWN version back from Mountfield school to Virgins Lane Battle in the early to mid 60s.