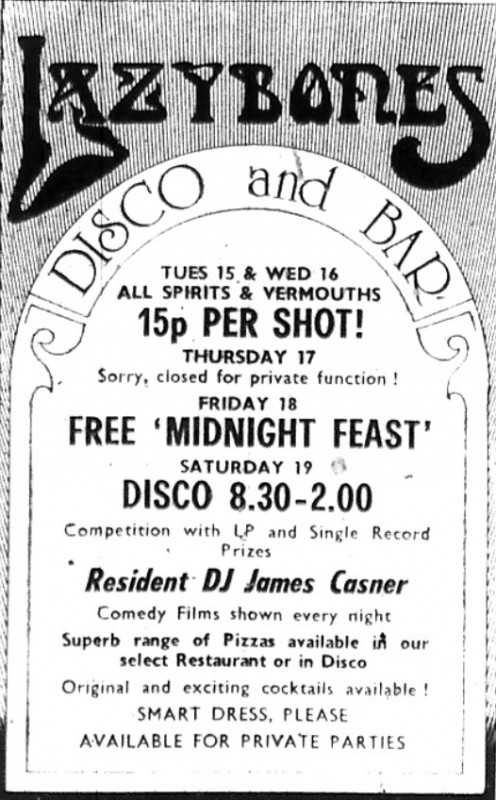 Peter Fairless… Which one was that, under the Queens?

Jim Breeds… That rings a distant bell … was it under Queens Hotel?

Alan Esdaile… Yes Pete and Jim, trying to remember the chain of different names, was it The Flying Machine at one time? Bonitas, Emmas etc.

Alan Esdaile… Thanks Chris! You just reminded me of the smell and the greasy taste. I feel sick!

Virginia Davis… That brings back memories

Jim Breeds…  Bonitas I could have volunteered as a name but Lazybones had gone from the memory until now!  Gosh yes. Chicken in the basket wasn’t it? And Scampi too, probably!  lol.

Chris Giles… Yep it was in a basket.

Jon McCallion… We played at bonitas after recording fooling around the same night I think.

Mick O’Dowd… Don’t forget cockroaches in a basket at Bonitas.

Gary Kinch… If I remember right Lazybones was fitted out in November December 75 and opened Early 76 ( I could be a month or so out). Simon Falla was the manager at the time. He employed several college friends for various duties at the club. Justin (surname ? long blond hair) was taken on as a doorman, amongst others. I was taken on as a helper/labourer during the re-vamping stage prior to opening……..One of the perks of the job was a free lunch in the Queens Hotel staff canteen 🙁

Jim Hobbs… I was the first DJ at Lazybones and did the sound system install with zero budget. We reused the old Tannoy speakers from Bonitas days powered by a small amplifier and driven by a cheap mixer with a pair of old Garrard SP25 decks (remember them?). The only piece of quality kit was my own Beyer microphone. I was there for some time as it built a bit of a crowd before falling out with a young Simon Falla.

Mark Hardwick… Yep I remember below the Queens Hotel and the DJ played this at the end of the night https://youtu.be/wWNoKIrH7ms

Phil Gill… Only club I was ever thrown out of. Simon had to let me back in a week later, we had a gig there.

Simon F… Blimey, takes me back. Gary is right, we revamped Bonitas into Lazybones in late ‘75 early ‘76 and opened in late March that year. Jim was the first DJ until he caught me using his vinyl for a student disco without his permission – sorry Jim! Then had Pete Boiling as DJ. We reckoned it was going ok if we had just one fight per weekend…. Justin Hill was the long-haired bouncer. Don’t remember Phil getting chucked out! In fact don’t remember Phil in any sort of bother!! Still look back on it as one of my best jobs. Simon F

Alan King… ‘Without his permission’ – has he got over it yet ?

Linda Boiling… Hi Simon, Pete had a great time at Lazybones as DJ with fond memories. I used to help him out handing him his 7″ and 12″ singles as requested and I also worked in the restaurant where on the menu we served tongue salad for 50p. Why? I have some photo’s from 1977 of you, your staff, Taffy and Lynn, Pete and me which you might like to see. We married in 1978 but sadly he died in January 2020. He would loved to have been able to get back in contact with you and see all these lovely memories of the 70’s.