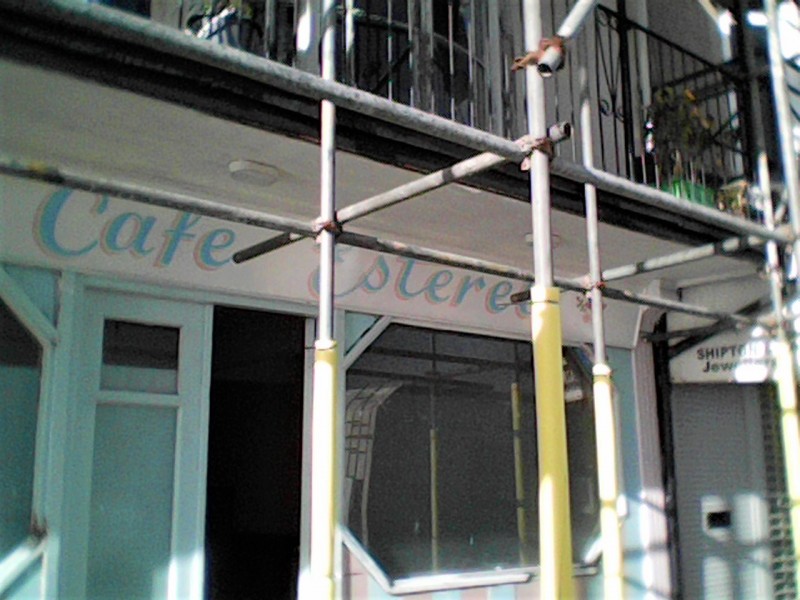 Dave Trodd… I wonder if anyone in the group is old enough to remember this place (see attached pic of the Esterel Cafe on Hastings seafront) which I believe was either the first, or one of the first, coffee bars in Hastings. I have told people about it before, but today I noticed that they’ve uncovered the name on the front. I used to go there with a crowd from the art school at the Brassey when I was about 16 (in 1957). I think it belonged to Chris Paraskiva who has since died. I’d be interested in any information anyone might have.

Alan Esdaile… All I could find Dave is that they had a branch in the memorial  in 1954.

Anne Murray… But before my time. I went to the Brassy as part of my art course at Hastings college of further education. We would go to the Fiesta cafe round the corner (or the pub!). That was the 1970’s.

Martyn Baker… I think I worked here in about 1975. It was “Le Flacon” by then (a French restaurant, run by Greeks who’d never ever been to France!)

Jim Breeds… The only reference I can find to a Café Esterel is at 4 Bank Buildings in 1953. (Proprietor Maj. Sims-Hilditch). Maybe he moved to White Rock later or opened another branch. But now I’ve found this in the paper dated 23rd May 1953, so there must have been two cafes with this name.

Simon Fraser… I went to Eastbourne college with Chris my mother Mary Fraser owned the restaurant next door and the shop next to it. I only know it as the le falcon.

Graham Sherrington… Old enough ow yes, and that shop near by that sold rocks and crystal. My wife still has a crystal from it.Had the Lighthouse in the side window.

Leigh Kennedy… The shopfront is very unusual and the business, as far as I can remember, has been closed down for decades. Looking at old photos it still has the same colour scheme that it did in the early 1970’s! In 1962 it was a Restaurant called “Le Flaçon”..

Ralph Town… Was it known as the Falcon restaurant in the 70s or early 80s or do I have a time and space displacement?

Mick Knights… I remember going to a coffee bar across from the baths for a milkshake after the seagulls swimming club most weeks. That would be late 50’s early 60’s it could well have been this one as I certainly remember the facade.

Claire Lonsdale… I didn’t know Chris Paraskeva had died. How long ago did he pass?

Wendy Weaver… I think this was the one with the downstairs function room? Great place for a “bit of a do”.