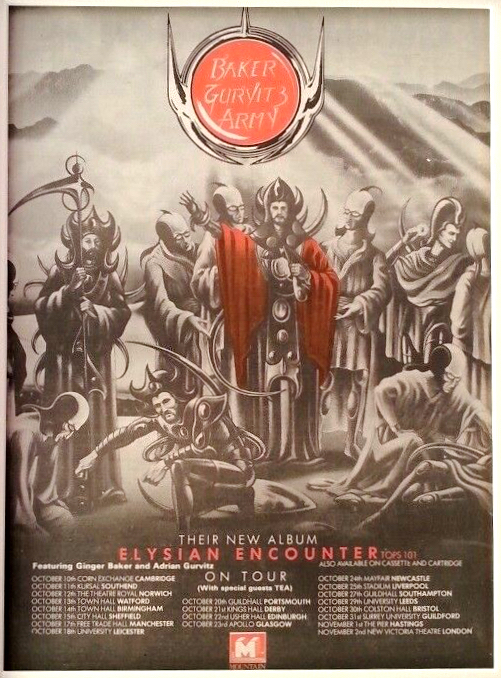 Michael Mepham….One of the best Typos ever, Pea! They were actually a Swiss band called Tea and were excellent, great sense of timing. Got a feeling they may have supported Golden Earring but I can’t be sure of that. I have the album they had out at the time – really good.

Mick O’Dowd….Great band. I worked on the Pier with them. I stood sidestage about 6ft from Ginger. Wot a drummer! Made it look so easy. There were only three of them but the support band had to set up on The Ballroom floor half way up the side.

Glen Piper….Yeah, worked both gigs with these guys on the Pier

Tony Court-holmes….yes i was one of the in house roadies with glen piper

Sarah Harvey…..Baker Gurvitz Army. The article actually appeared in Stephen Turner’s Group Scene article on February 8th, 1975 just after the release of their first album, and they appeared on the pier some 9 months later

Gary Kinch…..Remember that one. Well, when I say “remember” 😉

Nick Webb….I was there again.

Peter Gladwish… Thanks for posting this Sarah Harvey. I went to this performance but whenever I mention the B.G.Army to anyone, I get a blank response. I’ve often wondered if I’d imagined the whole thing! (Maybe I did!!!)

Sarah Harvey… Well if you imagined it Peter Gladwish, then so did I 🙂

Peter Fairless… My ears still hurt just thinking about it

Jim Breeds… I’m more interested in the folk article alongside it. I’m sure I saw Hemlock at the Black Horse, I was there or at the Hayloft regularly at about this time. And the late great Peter Bellamy gets a mention too. 🙂

Eric Cawthraw…  Yep, a great gig and only 40 years ago. I liked the Gun – who morphed into Three Man Army, who morphed into BGH. Tea were spot on too. Here’s a sobering thought – if I’d written this in 1975 about a band seen 40 years ago, it meant I was going back to 1935! ….I’m off to play my Al Bowley wax cylinders. 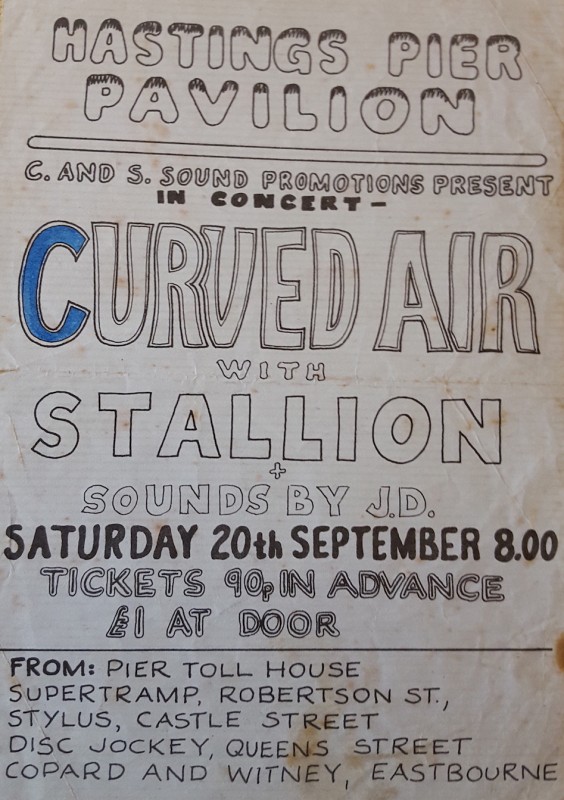 John Wilde… I was there. Onstage. Brilliant night!

Nick Webb… I was there yet again 🙂

Chris Giles… “Really like most of Curved Air music… Especially enjoyed gig on the pier many years ago..”

Mick Mepham….Ahhh, he was good. Alan Esdaile…  I want to know how they look younger now.

Terry Pack… Portraits in the attic, I reckon!

Andy Qunta… Such an interesting contrast in fashion there!

Yvonne Cleland… You mean between Laurie and that hippy in the afghan, Andy?

Simon Page… Laurie and Tony both came to our gig last week. Was great to see them both. all photos supplied by Pete Prescott

Pete Prescott….my first band.i joined in Sep 72 and left in Sep 77.the main photo is after a gig at sittingbourne around 73.my hair was like miss piggy’s.we were on the London pub circuit from 74 till 77.played all the London venues.did the 100 club with the stranglers in 76.played all over England.wrote a lot of songs.still got the tapes.i had a 26 inch waist.you could play a tune on my rib cage.very young and very naive.had the most wonderful time.we were all like brothers.the one with the long blond hair is Andy holiday.he does the p.a. at beatles day.he had that laugh even then ! when the band finished in 77 i came down to Hastings to see my girlfriends parents with her one weekend.i auditioned for a band (went along as a kind of practice for the London auditions) it was steppin out with tich turner wes and roger hubbard.i was living in Hastings by the end of the year. Now that mic stand is well dodgy.the one i have now (i have had it since the lost boys started in 89 is the same make) its had new legs and feet ! the jeans were from kensington market (as was the jacket ) i had boots with 5 inch heels ! I thought i looked the dogs bollocks. . . sadly i looked daft and could hardly walk ! ah youth ! all cuttings supplied by Sarah Harvey

Sarah Harvey….Stallion find new member is definitely December 6th 1975 issue, which would probably date the earlier cutting about the change of line up to about Sept / Oct. 75

Phil Gill….The Jenni Inness cutting re John Wilde was April/May 1975. I think Tich left in April, and John was certainly gigging with us in June. I definitely remember playing Nottingham University’s May Ball and thinking “Why is it a May Ball if it’s in June?”. We played that one with a band called Slack Alice and all got horrendously drunk on the two crates of Newcastle Brown thoughtfully supplied to us by the Students Union. It was also memorable for John running after the van as we drove off campus after the gig, and falling flat on his face because he was trying to pull his trousers up as he ran. No idea why we drove off whilst he was outside the van or why his trousers were down – maybe he was changing – but that was just one of the times he made me scream with laughter. I remember a couple of the other times, but he wouldn’t thank me if I mentioned either of them here…

John Wilde….Hehehe they were the days my friend!

Alan Esdaile….I remember seeing Stallion at the Speakeasy Club in London. Morgan Fisher from Mott the Hoople was in the audience.

Chris Meachen…..Ah, the speakeasy gig;- I remember that one.. Spent much of the evening chatting with Overend Watts about customisable basses… Also present were Brian May & Roger Taylor, before they were famous.. (I’d know the hair anywhere, though…)

Andy Qunta….Speakeasy was always an interesting place! One time Factory played there, Keith Moon was there. We told him our drummer was a big fan, so he came backstage and talked to Lol. Lotsa fun!

Geoff Peckham….Andy. I stood next to Keith Moon at the urinal in the Speakeasy loo and told him our drummer was a big fan, could he come and say ‘hello’? He said something like ‘certainly, dear boy’ and I led the way. When we got to the dance floor in front of stage he handed me his bottle of brandy and did a 30 second ‘idiot dance’ which entertained all around. He then stopped, straightened his clothes, retrieved his bottle and came to meet Lol backstage

Ghoulz… Is it possible this band played The Kinema Ballroom Dunfermline in Fife once in 1971?

Phil Gill… Probably not. Steve D was still at the Muller and Effigy stage of his career then – and Phil T and I were only 15. Andy Qunta….Great to see these pics! BIg fan of the band & Sonja!

Martyn Baker….”Great photo. I remember those weird fire-buckets too, and wasn’t she a Babe!”

Sarah Harvey…..She was such a beautiful lady.