The Hastings Observer printed this in 2011. Can anyone confirm this?

ROCK legends The Rolling Stones played one of their earliest gigs right here in Hastings.

However, it was not as you might expect in the pier’s ballroom or the now closed Crypt. Oh no, perhaps the biggest band to ever play in 1066 Country made their bow on stage at a debutante’s ball in the depths of the town’s network of caves.

Wildman guitarist Keith Richards has recently released an autobiography in which the iconic axeman reveals the band visited Hastings back in July 1963 for a gig in what is now Smugglers’ Adventure.

This would have been less than a year after the band’s first concert and just weeks after they were signed by their now infamous long-time manager Andrew Loog Oldham.

News of the subterranean performance came as a complete shock to the caves’ current custodian Trevor White, who is manager of The Smugglers’ Adventure.

He told the Observer: “We knew the caves had been used for a variety of musical performances over the centuries ranging from dances in the 18th century to regular jazz evenings in the fifties and sixties

“However, none of us realised that the great Rolling Stones had played here and now we’re desperately trying to find out more about it and see if we can trace anyone who may have been here to watch them play.

“The details are a little sketchy, and Keith may not have the best of memories for everything that happened to him in the sixties, but there’s definitely enough information in the book to prove that it did take place.”

In fact, any memories Richards does have of the event are far from glowing. In his book the guitarist – famed for his hedonistic rock and roll lifestyle, says the gig had taken place the night before a performance at the Wisbech Corn Exchange in Cambridgeshire.

He wrote: “By the greatest contrast known to rock-and-roll audiences, the previous night we’d played a debutante’s ball at Hastings caves, for somebody called Lady Lampson, all via Andrew Oldham, an awfully super-duper, upper crusty affair doing a lowlife bash in Hastings caves, which are quite big.”

And, according to his book, Life, the concert didn’t end well after someone asked the former Stones’ keyboardist, Ian Stewart, to play Moon River and a fight broke out.

“It’s extraordinary to think that one of the biggest bands in the world played here in Hastings and none of us were aware of it,” said Mr White – who was delighted with the revelation despite the less than glowing reference Richards gave the town.

“I’ve been working in the caves for more than 10 years now and I’m always discovering fascinating new information about them.”

Peter Fairless….Oh, yeah, if it was in Keith’s book, it was probably true. He’s the one, bizarrely, with the good memory!

Andre Palfrey-martin….Now I have read this, I do recall that about this time, there was a rumour that somebody from the Rolling Stones had been taken to A&E at the RESH after playing at a private function in the Caves.

Mick O’Dowd….The rumour was originally featured in “The Face” column of one liner bits of news in NME I think but it said that it was St.Clements Hall for a debutante’s “coming out” party but it could easily have been St Clement’s Caves.

Peter Fairless…. Nice to see this come up again! As an additional bit of information, not that it actually confirms the gig taking place but does add more support… Lady Lampson, later Lady Killearn, who is supposed to have organised the ball lived at Etchingham, so it’s going to have been Hastings, not Chislehurst, if it happened!

Andre Martin…. That was a rumour about the Stones, we think that the caves they were referring to back in the 1960s were at Chistlehurst .

Steve Turner… The deb ball was for Roxana ‘Bunty’ Lampson. I spoke to a photographer who was there. In his book Rolling With the Stones Bill Wyman says that they couldn’t play because Brian Jones was sick on the way down in their van. The photographer said it was because the electric supply wasn’t powerful enough. I’d like to find out more. It seems definite that the Stones came down though.

Spinning Back The Years. Nice write up on local record shops, back in the day, from Andy Hemsley  in this weeks Hastings Observer (8/7/22) 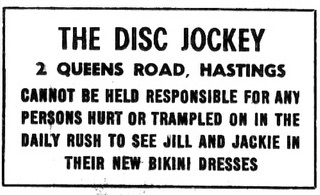 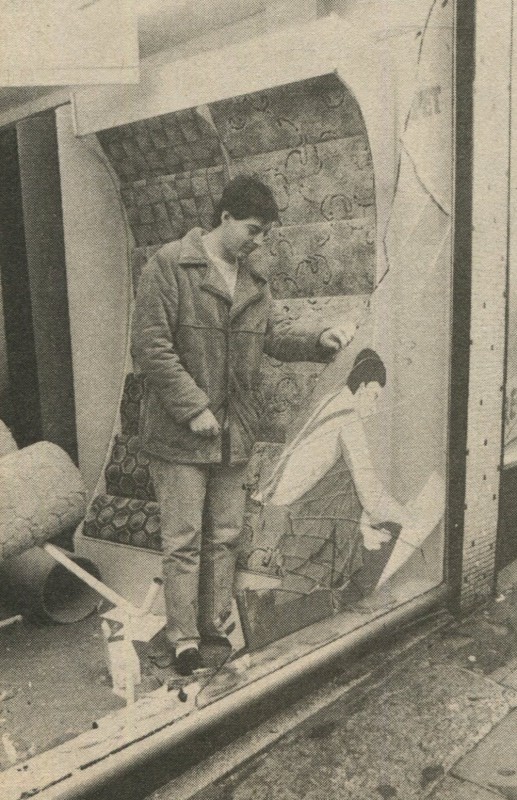 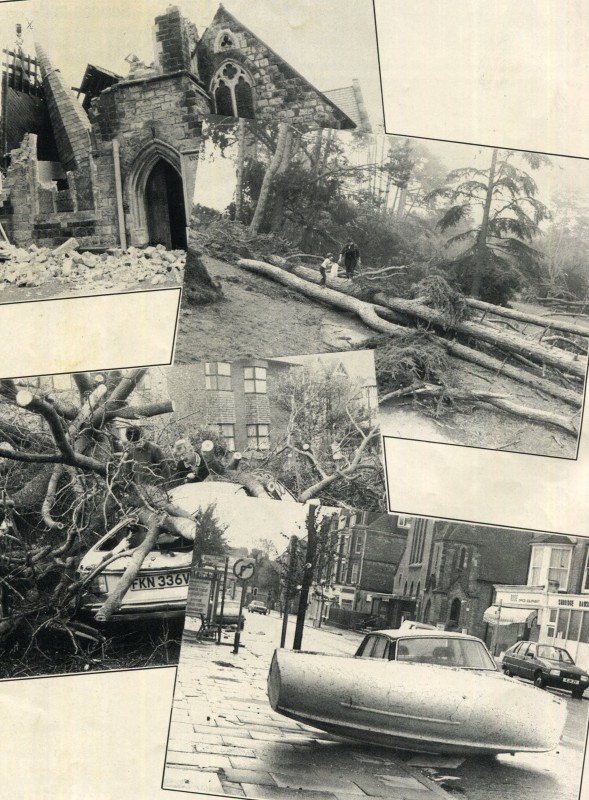 Wendy Weaver… Lost almost all of our roof in the 87 storm.

Matt Thomas… Gill, I don’t think nowhere near in comparison

Tara Reddy… Many roofing businesses started up that year!!

Lorna Brazier… And that’s just a small fraction of the damage across Hastings & St Leonards in 87.

Christopher Parry… I was at sea during that storm,I’m just saying. I remember those days!

Monica Bane… Great pics, Still have the newspaper from that year!

Steve Beerling… I was working on the building as a labourer in the 87 storm and remember going up ladders the next morning repairing roofs and it was still pretty blowy up on them. Pretty daunting.

Amanda Hilton… I’d been at work as a control Operator for East Sussex Fire Brigade for 6 weeks it was a massive learning curve. Nothings fazed me after that. I retired after 34 years service .

Broadoak Studios… I slept through that one!

Neil Cartwright… Our fence picked up and flew like a frisbee into our conservatory.

Dawn… Slept through it and total shock when I woke up. My dad however, worked through the night at Beauport Caravan Site to keep everyone safe. Lots of trees down – Scary stuff!

Stephen Moran… Hi everyone, as some of you may know I’m currently doing research into the popular music histories of Hastings and I was wondering if anyone is in contact with Stephen Turner? Steve was in my class at Hastings Grammar school in the sixties and early seventies and he was a journalist at the Hastings Observer during the mid-seventies where he wrote a regular column called ‘Group Scene’. I would really like to make contact with Steve if possible and I would be grateful if anyone can help me get in touch. Many thanks

Peter Thomson… Good luck with that Stephen. Just to confuse things, the Steve you are looking for was one of at least three Steve Turners that were in roughly the same age group and around Hastings at that time. One, then an active musician, is my brother in law but I’m afraid was never a journalist.

Mick O’Dowd… I remember him when I was promoting. Used to go and see him and he would print pics of groups I was putting on and give them write-ups. Nice bloke.

Stephen Moran… thanks Mick I have equally good memories of him from school and he really championed Hastings bands and knew a lot about them. I’m still hopeful that I’ll track him down.

Alan Esdaile… Likewise, what Mick says. Nice guy and always went out of his way to promote what was going on. 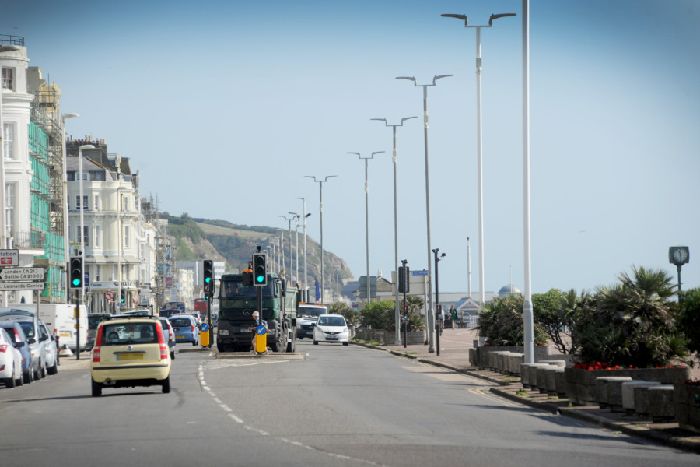 A stretch of St Leonards seafront will be closed to traffic next month to mark World Car Free Day.

The road will be turned into a pedestrianised community space on Sunday, September 22 with entertainment and activities devised to encourage people to take sustainable transport alternatives.

Wendy Weaver… Pity the people living on the alternative roads.

Els Wilcox… It’s not for roadworks it for world free car day.

Richard J Porter… Yep, the A259, South Coast Trunk Road, Folkestone – Honiton Trunk Road. The only East – West way to cross the country south of the M25/M20. A road that leads to the Channel Ports from the West. Won’t cause any issues for all that through traffic, HGVs, coaches holiday makers and so on making their way to The Channel Tunnel and Dover. What will they do? Send them up Harley Shute to Sedlescombe Road and the Ridge? Or maybe the Link Road and the Ridge?

Paul Chenery… Yet another mega-cock up from a ‘department of f* stupid ideas’. Maybe the same type of idiot that put the bus lanes along Bexhill Road, pushing traffic passing the bus stop at glyne gap into the path of oncoming traffic.

Pete Brazier… Great idea but where and how are we going to Park the Car?

Paul Morfey… Few people seem to realise how nice life would be with far fewer cars!!?!

The White Rock Theatre will undergo a major refurbishment in 2019. This year will see a full refurbishment of the original wooden auditorium flooring, changing the seating configuration and giving the venue greater flexibility to present standing concerts in the main house for the first time since 1985.

Matt Thomas… I’ve been to two 80’s music acts last year,Paul Young & Kim Wilde both packed houses they took seating out for Kim’s show and the place was buzzing.A step in the right direction 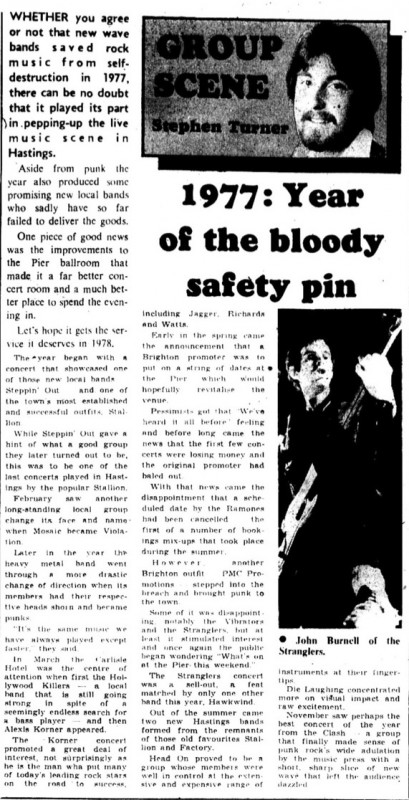