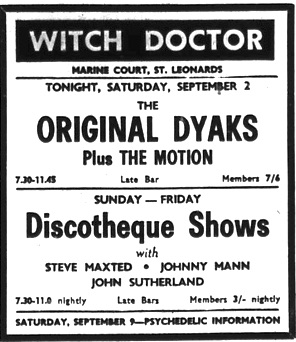 Janie Watson… Steve Maxted was one of the best dj’s.

manager of The Cobweb & Aquarius and I think someone said he managed the cinema for awhile?

Kevin Burchett…..i think he was also the manager of diplocks in eastbourne at some stage

Peter Pursglove…..first met him up the Witch Doctor, he was the electrician then ,later on he had the Sportsmen Club opposite the Pier

Andre Martin….He started in the cinema trade as a trainee projectionist so I understand at the old Gaiety in Queens Road.

Sandra Bryant…..I knew him from Scallys, he always held “court” in the Sober Judge