Mike Wright…..Drifters with the great lead voice of Johnny Moore

Philip Meston……The only performance I saw at Kings was The Three Degrees and that was because I free tickets! Robert Searle….Saw Three Degrees there, the place was packed out .A really good night with Clodagh Rodgers in support.

Colin Fox….. also saw them at Kings and they did a great harmony version of MacArthur Park

Colin Fox… The Drifters had 60 different singers over the years, and the last original Drifter died in 2007. I remember reading years ago that their were 42 different groups called The Drifters touring the world in one year. Andre Palfrey Martin… I have dug around and come up with the attached photos from Thursday 27 July 1978 – One is HRH talking to the girls before the show in the Foyer of Kings Country Club, Eastbourne and the other was taken with HRH and I think it was Sheila Ferguson doing the ” bump” – this image of HRH was flashed around the world within hours and made newspapers everywhere.

Alan Esdaile… Could it be Andre in the background on the first picture?

Andre Palfrey Martin … It could well be, I was working that night, and quite on the cards I would have been backstage, security had almost shut down the whole building, we had to be at the club by 6.00pm a good 2 hours earlier than usual, once in you could not get out ! however in the club itself, I could go anywhere as usual, so its on the cards that could well be me. I am sure that I would have had my hair and beard trimmed for the night, and would of course been in some form of formal attire. It was a great night. The Girls were really terrific people, but I still cannot remember their Tour Managers name, I think it was Richard …something, I do however recall that I had to give up my dressing room that night for him to use, I had to share the resident bands room with them.

Trevor Walker… My wife and I were there ! Good times were had at Kings ! Show Place of the South !!!

Jacqueline Marsh… I was there about half a dozen seats away from Charlie, he was absolutely drooling over the 3 Degrees !

Andre Martin… Your quite right about Prince C this was the famous shot that went global when he visited the club for the Prince’s Trust.l must dig out the original and have close look at this presentation line up,all I can remember was that was next to Sandy Croft in the second row it was 40 years ago 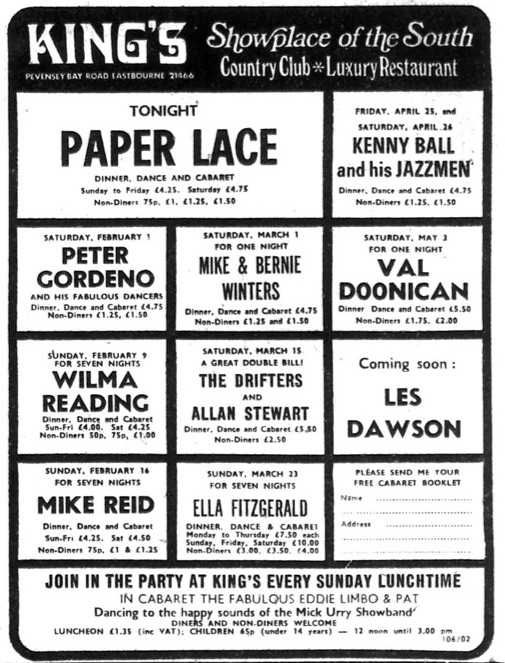 Julie Morris… Often went on a Thursday night – loved it!

David Edwards… Imagine Ella Fitzgerald like a diamond atop a pile of also tans, Kings certainly pulled out all the stops there!

Jim Hobbs… Fair comment, but to give them their due, the others on the line up were big UK stars in their day.

Tony Court-holmes… Andre and i worked there

Terry Pack… The sad thing is that most ‘entertainment’ in Eastbourne is unchanged in 45 years. The Devonshire Theatre has pantos and Agatha Christie, the Congress has bands from the 60s, comics from the 70s and orchestral music from the 1800s, and the Bandstand has tribute bands all Summer. The idea that a musician like Ella could do a week long residency these days… if only.

Richard Cripps… Mum and Dad owned a chalet there, spent so many memorable years there from the age of 8 [1971] until it closed. Had the opportunity to see sooo many stars of the time there… and then across the road to the disco. Any one remember Nan on reception? or Barry the house drummer?

Michael Williams… I lived at Kings, as my father was public relations officer, I remember him introducing the acts on stage including Sandie Shaw, Tom Jones, Engelbert Humperdinck , Dusty Springfield and loads more. My father had an album with him shaking hands with all the stars before he introduced them on stage. That would have been the sixties.

Robert Searle… Clark-Elsom Collection,who remembers them? What ever happened to Graham Clark, the bass player?

Perri Ann Haste… I used to go there in the Mid to late seventies – always had a great time! – happy days… those were the days eh

Mavis Johnson… I was life guard at Kings swimming 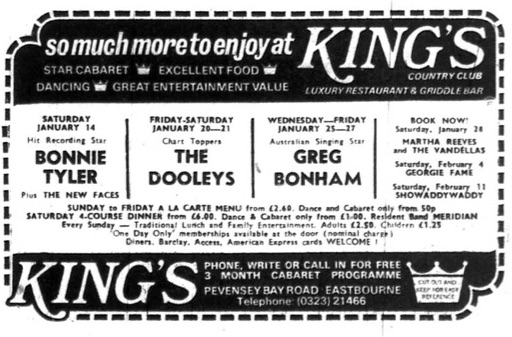 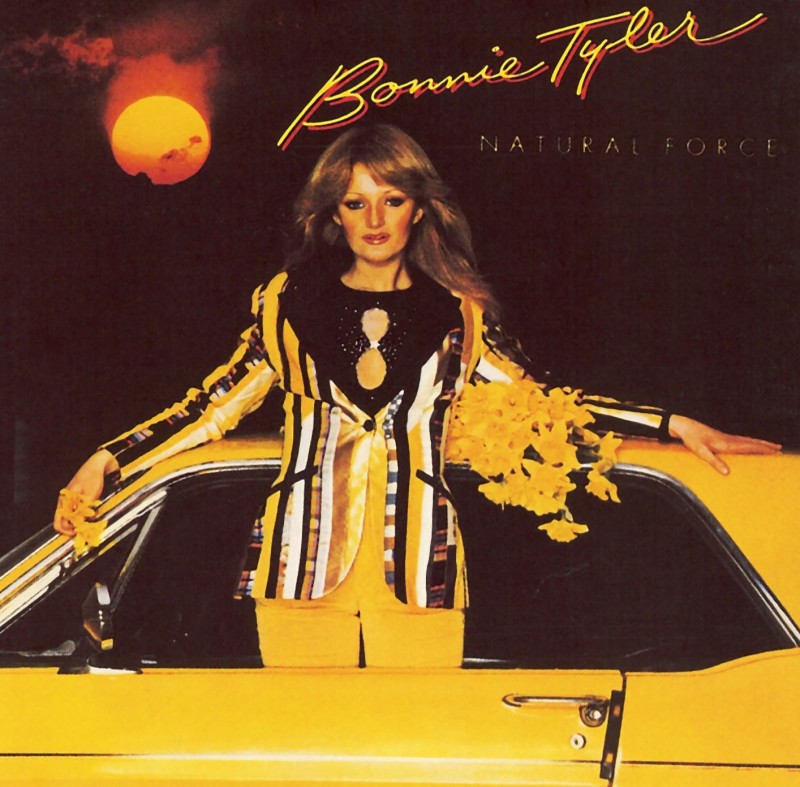 Janine Anne Scott… I was still there for this bunch 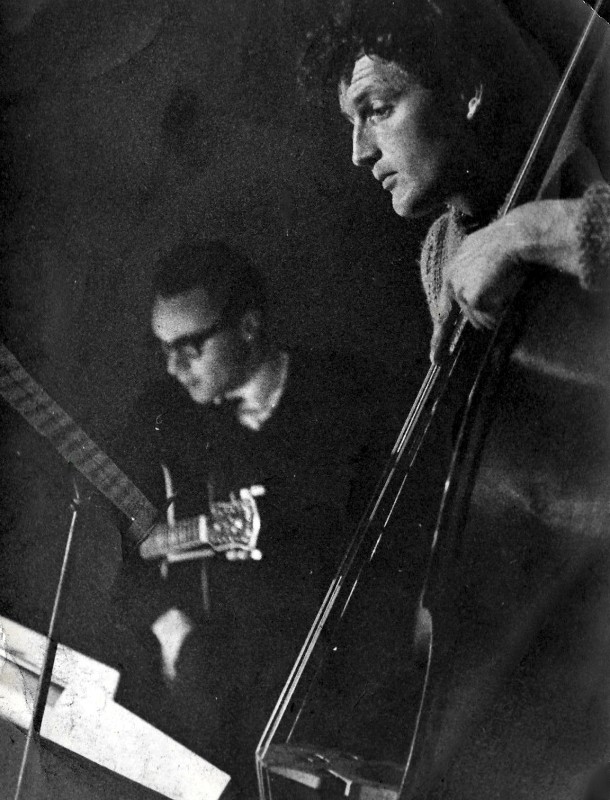 Tony Court-holmes… Sundowners Club over the road now I do feel old. On the way back Taffys for chips Andre Martin… OMG 30+ years ago – this group photo was taken when the Merries were part of the Jimmy Jones Season – January 1979. Great venue, great acts and great owner. Janine Anne Hemsley…Yayyyyyyyyyy I was in Meridian lol. I was 15 .

Robert Searle… I remember The Clarke Elsom Collection supporting many stars there, with Graham Clarke on bass guitar.

Gary Kinch…. I  only went there once, enjoyed it at the time. Does anyone remember who the owner was?

Andre Martin… Ray King owned the club, but the real Boss was Mrs King, a lady that you did not cross, only if it were your last moments on this earth, don’t get me wrong, she was a very nice person, but was in control. Ray was a great person to work for, spent 5 yrs on the Entertainments team. Here is ” The Guv ” taken at a Municipal Event in Eastbourne in mid 70s.- I enjoyed working for him. Jane Hartley… I worked in one of the Hastings pier shops early 80’s, lots of performers at Whiterock used to wander around the pier before their show. Met many, including the Dooleys! Andre Martin…..These were taken Summer Season 1974 in the small building next to the new club that was being built by Ray King, when that Opened the whole scene changed and we then could deal with 2500 on a busy night. I have just worked that out – These photos are 40 years old !!

Ian Hargraves….You have not changed much!

Polly…  I was just thinking about Kings Country Club and realised I have no surviving pictures of my life there. Before Janine came along I was the girlfriend of Colin and we came to Eastbourne together after Colin left the Eric Delaney Big band. Meridian was named after the local knicker factory where we came from. Pete Brent was guitarist, Barry Goacher was the drummer, Colin Hadley keyboards, Steve Devine was saxophonist. There was also a trumpeter called Keith Bolton and his wife Paula. When we first came Colin was part of the Mick Urry band. After Mick and the band parted Meridian was formed. I have many happy memories of Ray taking us for dinner on our birthdays in his Rolls Royce,as Colin was the youngest member of the band. I also remember the band who played downstairs and one of the members Laurie Broadway, who was a mate. Eddie was the entertainment manager and Lenny was one of the barmen. I remember Pete Bonner well, as we had a party at his house once and I threw up all over his prize roses! Those were the days!

Janine Anne Hemsley… Polly are you there ??? xx

Jane Hartley… Kings put on great shows, saw many a big act there. Sundowners over the road, we used to belt over the marshes after the pubs chucked out, to get there before they shut the doors! Not to be recommended kids!!!!

Mick Knights… Kings was a bit too posh, ( which really means they wouldn’t let me in) it was the Sundowners every time.

Alan Esdaile… Agree with Mick. Used to go to the Sundowners. Saw The Real Thing, Mud & The Troggs among others.

Colin Norton… We (The Rebels) were one of the first bands to play at the Sundowners. It was quite a small building at the time. When we were playing somewhere else in Eastbourne in the evening till 11 pm. We would go over to the Sundowners and play from 1 am till 3 am or something like that. We played for steak and scampi 🙂 …. Oh, and fun as well 🙂