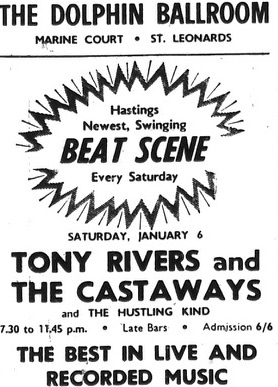 John Warner… Tony Rivers, met him in later life when his wife Tina came to work for me. That really is a blast from the past.

Tony Rivers… Yeah I was wondering just where I was that day!

Mick Knights… I still remember them playing Good Vibrations at The Witch Doctor, they were one of my favourite giging bands at the time, saw them on a quite a few occasions, one of them was most probably at the Dolphin Ballroom which was used while the Witch Doctor morphed into The Cobweb. My favourite live band at time, most probably there as it was the only place to go in the limbo between the Witch Doctor closing and the Cobweb opening.

Andre Martin… That was a great night at the Witch Doctor on our College events that always drew in the crowds. Noels band The Defiants were one of the supporting acts.

Jim Breeds… Love the alterations on the ticket.