Andre Martin… Turning out some old tickets, I found the attached from 29 October 1965 at the Dolphin Ballroom, St Leonards – you know the one, down one floor from the Witch Doctor. Thinking back I remember the main group The Lonely Ones – who were regulars at the WD and other local venues. They were based in Folkstone and can remember the late Chris Sayer once telling me that he thought they were good. What many of us did not realise at the time was who played in the group Neil Langdon who would go on and record with The FlowerPot Men – Lets all go to ….and on lead Guitar Noel Redding – who would change to bass and become one of the Jimi Hendrix Experience. Small world, but just goes to prove that we had some of the up and coming names cutting their teeth in our clubs and dance halls.

Alan Esdaile… Also Neil Langdon & Noel Redding were both in the band Fat Mattress which I’m sure a number of people here remember.

Andre Martin… From The Witch Doctor in 1964, one of the bands that Neil played with before the Lonely Ones.

Alan Esdaile… Looking at ‘Fab’ all round the ad, I can remember saying the word ‘Fab’ and my parents going mad and saying that its not a proper word, so I said it more! 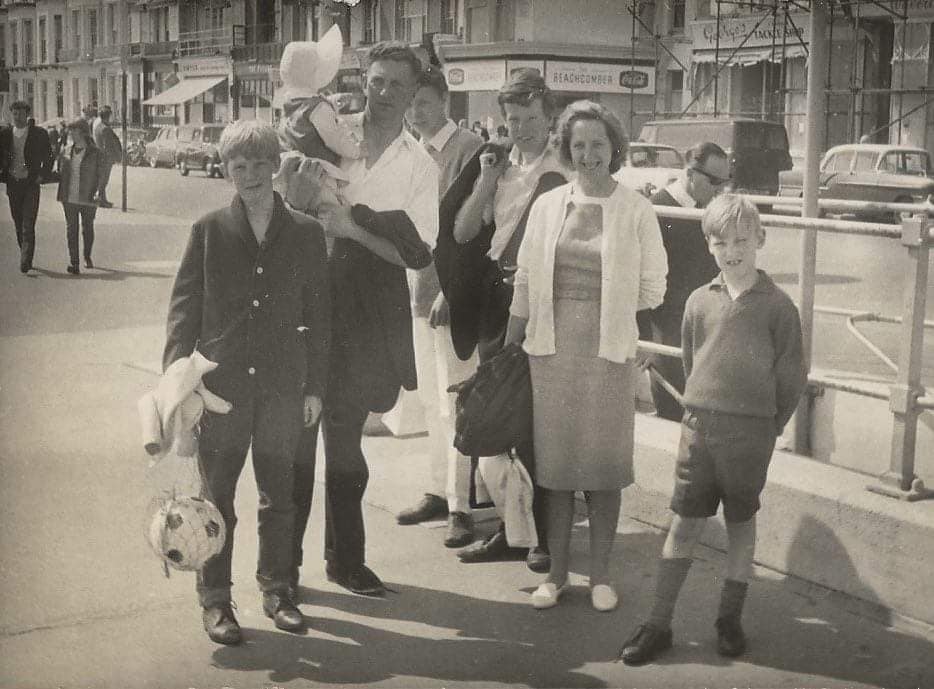 Trevor Webb… One of my Favourite photos taken 1966 by Hastings pier with view of Eversfield Place Central St Leonard’s .

Chris Meachen… The Lido coffee bar back there somewhere.. Hangout of ‘greasers’ where I spent a fair bit of my early teens.

Andre Martin… This must have been taken summer 66, the building behind the group with scaffolding was being demolished to clear the eyesore opposite the Pier where the Queen would visit on 14th October to see the Triodome. Yes there was a temporary car park on that site, which now is flats

Richard J Porter… Jacqui remembers it well. Her parents were Civic knees up.

Carol Paffett… Many a good evening sitting in the Lido , great coffee 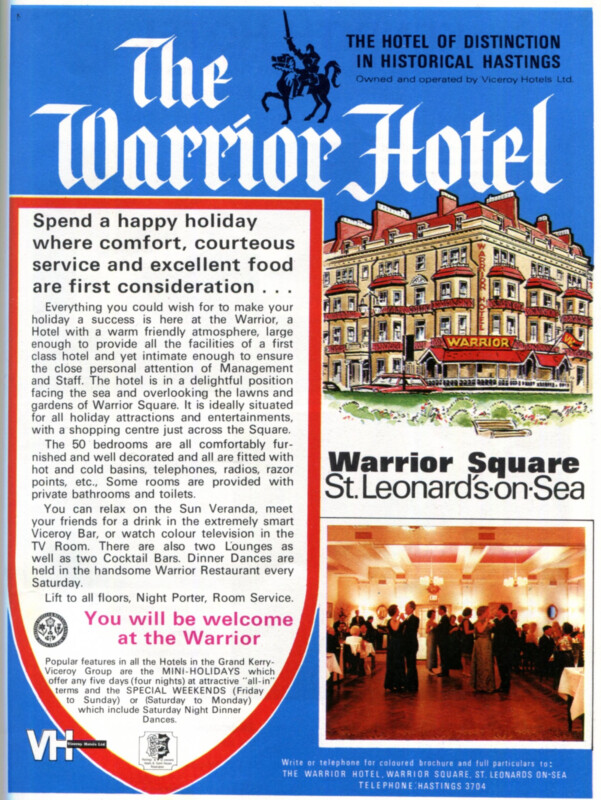 Richard Moore… Resident band from late 70’s to March 83 when it went ito liquidation. Many happy memories there and wonderful functions.

Virginia Davis… Went to a couple of firms Christmas parties there in late 70s.

Merv Kennard… Did a few student discos there in the mid 70s.

Ian Johnson… Played the sound there

Mick Barrow… Used to have the Lifeboat AGM there early 70s

Pat Burgess… Memories I worked in reception from 1965 till it closed in 67. Are you sure the date is correct, as I think Viceroy closed it on 67.

Alan Esdaile… Hi Pat, the publication that this ad came from was 1972 but I suppose its possible that they reused the ad from an earlier publication?

Paul Coleman… I had my marriage reception there – a long long time ago.

Gary Benton… It certainly didn’t close until the 70s as I remember going with my parents several times to eat in the restaurant called the Warrior Tent. If it had closed in 67 I would have only been 6 and too young to remember it.

Heather Wilson… Went there for dinner dance on our wedding day in 1980 .so it was open then x

Anyone confirm if he definitely appeared? I think he had to cancel a previous date due to pneumonia?

Mike Vawdrey… Maybe it was a touch of the ‘Rockin’ Pneumonia And The Boogie Woogie Flu’  – as per Huey ‘Piano’ Smith ? ?

Jim Breeds… I love that The Knives and Forks were booked for Saturday, and by Sunday it was The Return of …!

Mick Knights… Little Richard cancelled on the evening, we all turned up only to be reimbursed!

Mick O’Dowd… Is that THE Dave Dee?

Colin Bell… Yes indeed it is, shortly before the name change to DD, DBM&T.

Mike Vawdrey… Yes it is !

Dave Weeks… Never mind all that, the return of Knifes and Forks must have been a special night. Or was it an instruction as they went missing the week before?

Mick Knights… Just noticed at the bottom of the poster ‘Epivision is coming’. Being quite ancient I was there at the time and recall exactly what it was, does anyone one else? All of a bit of an anticlimax really, having been promised an audio visual experience it turned out to be an overhead projector that would project a dodgy photo of the group who’s record was playing, didn’t take too long for the novelty to wear off! 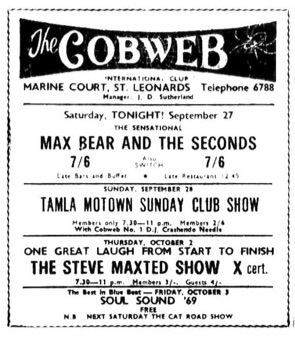 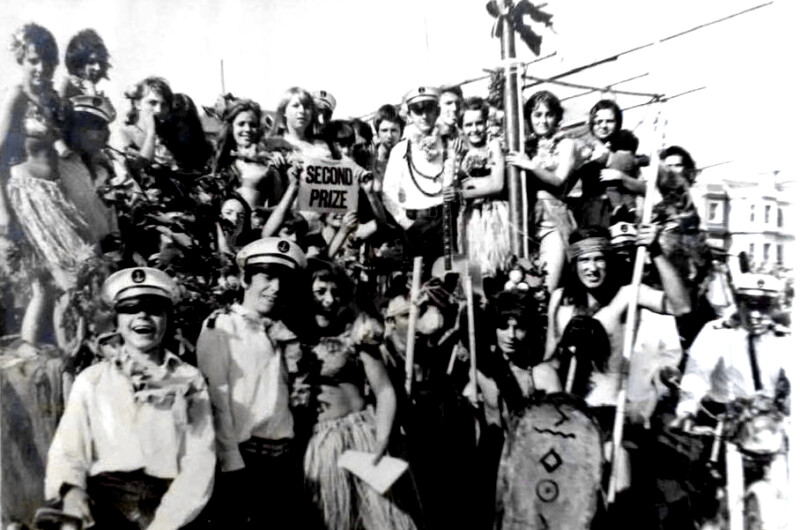 Jeanette Wilde… Ladies and gentlemen I give you the Happenings carnival float circa 1967. Second prize. What a great day that was! Any of you recognise yourself or friends please let me know! 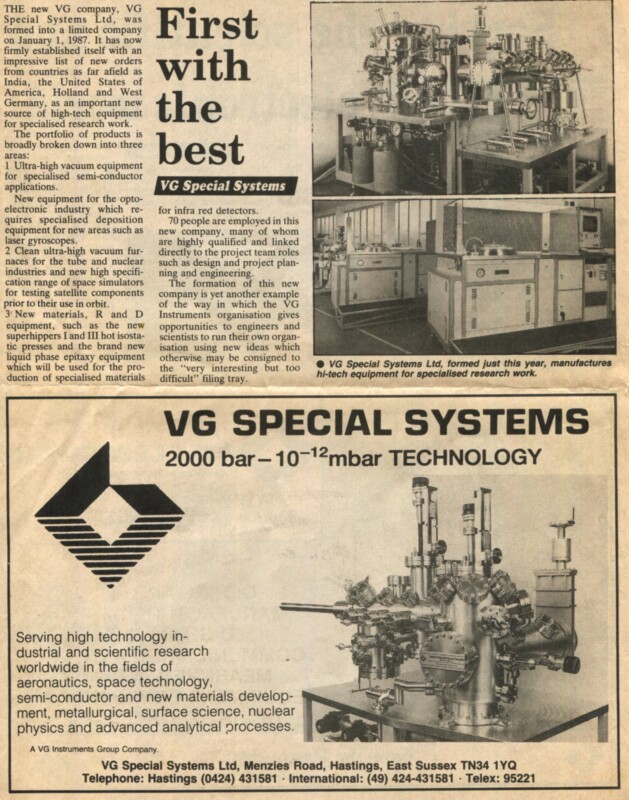 Andre Martin….Here is an advert that would have brought a great cheer from the Musical fraternity – bands and dj’s alike when it appear in August 1969 – how many used this food outlet during the early hours ? Perhaps it needs ” Blue Plaque” for services to the former youths of the town ! – I was almost going to say the Culinary Culture of the Town.

Robert Searle…..Really useful after gigs at Hastings area and onwards. Loved those days.

Mick Knights…..Also useful for those returning from the Sundowner

Gary Kinch…..Ahh…..remember taffys. He had a chippy in ore too. Spent many an hour chatting with him in there….Barry Baynon was his name. “Taffy,” was his dad.

Leigh Wieland-Boys…..What a blast from the past..! Stop off after a night out in either direction Sundowners, Kings or the Continental one way – Bonita’s, Scalliwags, Rennies, The Astral….to name but a few, the other!

Alan Esdaile….Fish & Chips tasted so much better in those days, was it down to eating them out of newspaper?

Leigh Wieland-Boys……out of newspaper & in the wee hours of the morning, much tastier!

Mick O’Dowd…..What would we have done without it. Sadly Barry & Co have passed to that great chippire in the sky. R.I.P.

Peter Millington… I used to get Fish and Chips there every time The Confederates played in Eastbourne which was most weekends. Taffy was in charge until his son inherited the night life in front of the fryer. I knew him as Buddy i.e. Buddy Beynon. My waist line was severely damaged in the years between 1964 and 1967 – the Confederate years and then again between 1967 and 1975 – The SPYKE years. Happy times, RIP Taffy and Buddy and thanks for the inches!

Andre Martin… How would we have existed without food outlets such as this, another was the Beachcomber along by the pier – I think the owner was Andy feeding us into the early hours of the morning !!

Dave Nattress… Yes Taffy’s – I’ve always remembered this from being a young lad of maybe no more than 10 years old. Me and a few mates walking from Bexhill to Hastings along the seafront and stopping off inland at Taffy’s about midday. I didn’t have a few pence for a bag of chips but Taffy gave me a bag for free – I’ve always remembered such a kind gesture. He got paid back time and time again when I was a good bit older though

Alan Mitchell… If I remember correctly the reason it was closed was that, Taffy after giving fish and chips away all day on St Patricks day, slightly worst for wear left the fryer on and it burned the place out. His son Barry who took over was a fishing pal of mine.

Mick Knights… No, it was the day that Prince Charles was made Prince of Wales, the rest of the story is right though.

Mick O’Dowd…. Many a artery blocking/ cholestral busting bags of fish & chips have I consumed. There was also a milk machine at the end of Bulverhythe Road which acted many a time as a lifesaver when dehydrated. 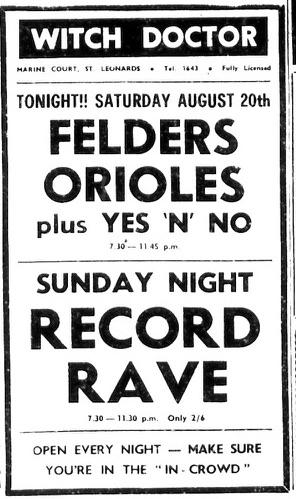 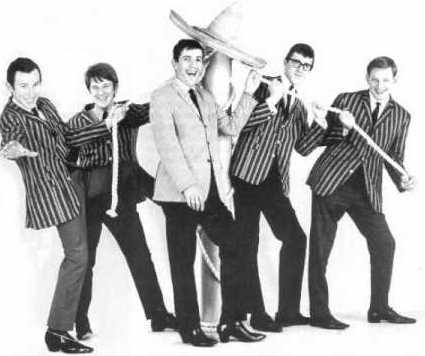 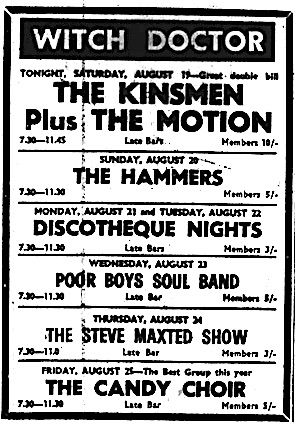 Should this read The Kingsmen of Louie Louie fame, or a completely different band?

Mick O’Dowd… I think it is the Kinsmen. Don’t remember The Kingsmen actually touring the Uk as they were an American outfit and I think I would have gone to see them if they did.

Andre Martin… THE KINGSMEN were a group from Portland Oregon.Louis Louis was released in 1963 and held the no 2 slot on the Billboard chart for 6 weeks. Re-released again in 1966 it did chart, but much lower down.