Mick O’Dowd….Only lasted a short while. Anybody know how long?

Andre Martin….I  think that it had all but finished by end of October 1967 – perhaps a little longer, but I don’t have much information after that. 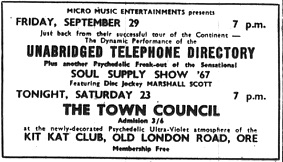 Carol Arnold… So do i

Alan Esdaile… so do i

Mike Waghorne… Look at that futurama guitar from mid 60’s Muller & The Town Council possibly? supplied by Jon McCallion. Anyone help on this one? Its definately Brian(Bear) glasses, Steve Kinch and Jon McCallion but not sure about the two guys in the middle.

Steve Kinch….”Just seen this on the SMART page – One of the earliest shots of me (2nd from left) playing guitar on stage, aged 14 or 15. You could probably count the number of gigs under my belt on the fingers of one hand . Pic courtesy of my old friend John McCallion, seen singing far right.”

Phil Gill….Three guys in the middle – I spot a bass player between Steve Kinch and the bloke with the white shirt and beard.

Steve Kinch….Well spotted Phil – looks like a Burns Nu-sonic bass – in which case, it’s probably Iain Cobby. The drummer’s left handed, so pretty certainly Steve D. No idea who the two chaps in the middle are.

Paul Dove… yes steve Ian replaced me when i formed 3 on ice with nigel dance & jed,,!!Dont know who the other two were !!

Pete Fisher….Iain Cobby  was in Black Ash, with me and Bernie Jeffery… 1970…my first band!

Alan Esdaile…..Thinking back to some of the early local groups I saw, the most popular covers they played were ‘Hush’, ‘Knock On Wood’ and ‘Ride Your Pony’. Anyone remember any others?

Jon McCallion… Paul, 3 on ice was before Muller, you left to form Candy Stripe with Jed and Nigel Dance. Ian Cobby is in this photo behind the guy with open shirt and Steve D is definitely playing .